Empowering East Harlem for More Than a Century

A Neighborhood of Immigrants

With a population greater than that of Albany, New York, East Harlem has long been a portal community to waves of immigrant populations. With each new generation—beginning with the Irish, Eastern European, and Italian populations of a century ago, to the more recent mix of Hispanics and African Americans, and the latest arrivals from Central and South America, West Africa, the Caribbean and China—Union Settlement has been able to transform itself to meet new demands and has proven to be a sustained and sustaining community bedrock. 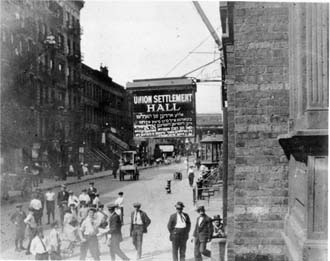 Union Settlement’s work has helped tens of thousands of children, youth and adults, many of whom have gone on to become leaders in the community and beyond. For example, former New York Secretary of State Lorraine Cortes-Vazquez and former New York City Council Member Robert Jackson are both Union Settlement alumni. Hollywood movie star Burt Lancaster played sports, acted in theater productions and learned circus arts at Union Settlement as a boy. He credited Union Settlement for “saving him from the streets,” and supported the organization all his life.

Written by longtime Union Settlement Board of Directors member Kate Buford, Burt Lancaster: An American Life is a critically acclaimed, best-selling biography of one of Hollywood’s brightest stars. Burt Lancaster is known to audiences around the world as the electrifying star of Gunfight at the O.K. Corral, From Here to Eternity and Birdman of Alcatraz, among many others. The biography brings to life his vivid, memorable on-screen presence as well as the off-screen life he kept intensely private. The first writer to win cooperation from Lancaster’s widow and close friends, Buford has written an intimate story of one of the last great unexamined Hollywood lives, capturing his roles as golden boy, husband, philanderer, and bisexual man. Buford’s portrait is compelling, comprehensive, intelligent—and definitive.